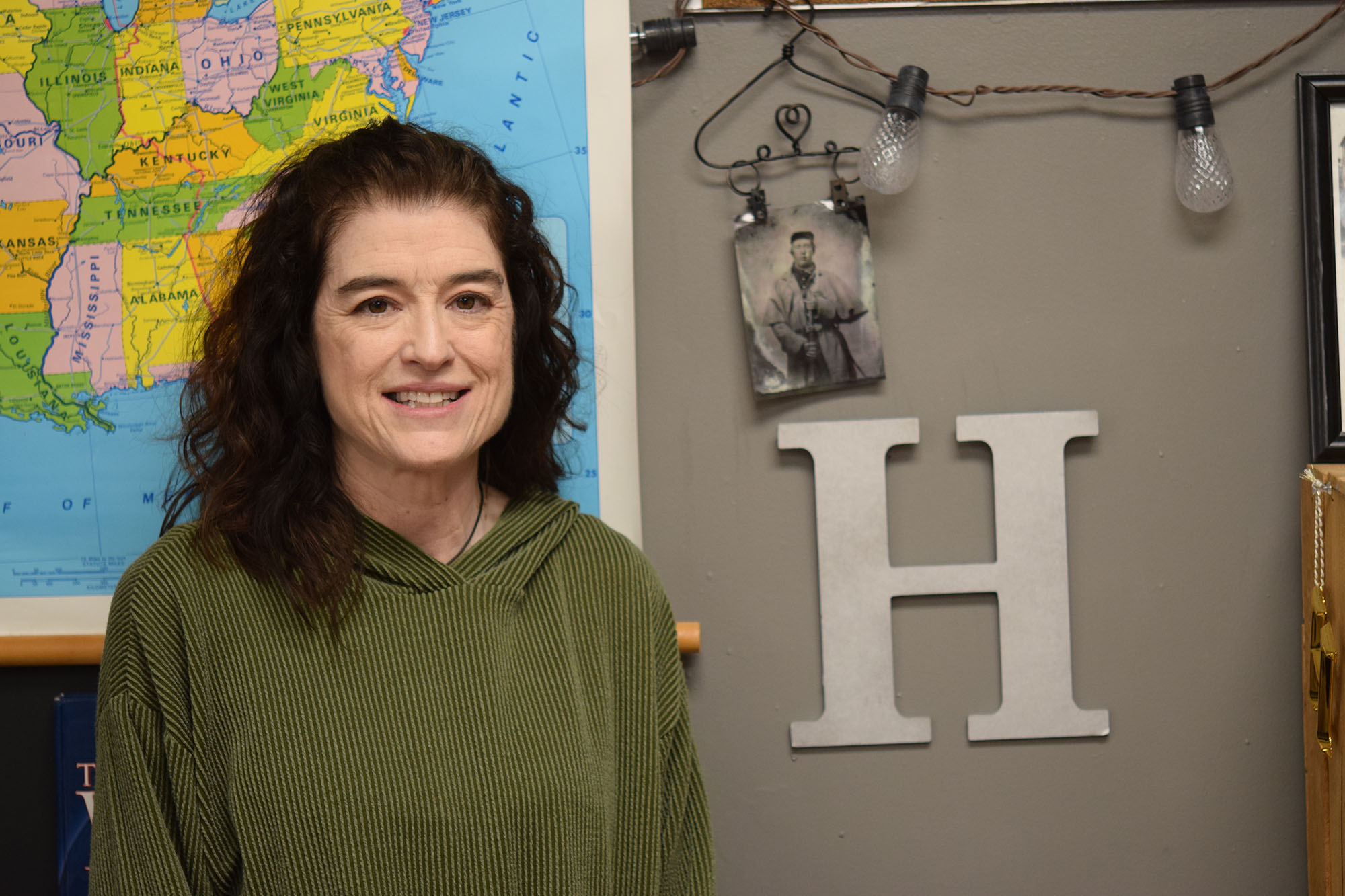 Growing up in Lewistown, Lisa Hall discovered something that shaped the rest of her life.

“I loved digging into things, including this desk from Scotland that came from my three-time great-grandfather, who was a doctor,” Hall said. “There were big drawers, so I just opened them, but as I got older I looked closer. And that’s where I found my first artifact.

It was a beaten metal box.

“When I opened it up and looked inside, there were little books, and those were his Civil War diaries,” Hall said. “So that gave me the story bug.”

Hall passed this history bug on to generations of students at Routt Catholic High School as the school’s longest-serving teacher. A photo of his Scottish-American ancestor, serving in the Civil War, is proudly displayed in his classroom, along with artifacts and photographs of his family and the families of his students.

Several of Hall’s classroom artifacts are quite colorful and obviously not historic until you hear the stories behind them.

“I have mine and my elementary school brother’s lunch boxes, Evel Knievel, Barbie and the Bionic Woman,” Hall said. “You can’t save everything, but I tell students if they have something special, save it. They may have Legos or Star Wars toys, and these items will tell your kids a story about you one day.

Hall encourages her students to explore the attics and basements of their parents and grandparents, just as she did in her youth.

“One of the greatest treasures is looking through old boxes full of stuff from your parents, yearbooks, old corsages, athletic letters or achievement pins,” Hall said. “That’s how I found some of my coolest things. I hope they can put everything back together one day so that they have this beautiful family story.

Hall enjoyed helping his elementary school teacher mother in the classroom in his youth and decided to become a history teacher while attending Western Illinois University. Hall was a student teacher at the VIT School District near Macomb and was looking through a job bulletin to see if there were any available positions when she saw Routt Catholic High School in Jacksonville was looking for a teacher.

“I’m not Catholic and thought you had to be, so I decided to apply just for practice,” Hall said. “They called me for an interview. I got lost while driving through Jacksonville but eventually asked for directions and got here. About a week later they called me and offered me the job.

Another part of Hall’s life – involving a fellow VIT teacher named Brian – would also change drastically around this time.

“On the penultimate day of school, the entire faculty threw us our first date in front of everyone at a retreat reception. We were kind of on the spot, so we went there,” Hall said. “I didn’t know he had already accepted a position at Jacksonville High School, so I was afraid he thought I was stalking him because of Routt’s job.”

Brian and Lisa are married and now have two adult sons, one of whom is studying to be a history teacher.

Lisa Hall started working at Routt Catholic High School in 1992 and “it was my first and only job,” she said. “I can’t imagine doing anything else.”

Hall had a passion for teaching, but she was also a shy, small-town young woman when she started nearly 30 years ago.

“I was scared because I was so young and close to the age of the students, but over the next few years I grew in confidence,” Hall said. “When I came here, we had no air conditioning and we only had a few computers in the typing room. I had to create whatever I wanted for my classes.

Hall now has the educational tools and environment she needs, thanks to generous donors and capable administrators. She supplements these tools with experiments and artifacts, something Hall didn’t have when she was her students’ age.

“Even though I loved my high school history teacher, we really didn’t do anything outside of book, book, book,” Hall said. “Good God, we’ve been through it all, but we haven’t been through much.”

“When I teach in government, I want it to be less stuffy and more about how they can participate. What do they need to know, for example, to run for the school board?” says Hall. current events and try to talk about local, state and national things.I hope they will all be registered to vote.

Hall students are developing a temporary exhibit on Routt’s story for the Jacksonville area museum, and some students have done additional volunteer work at the new institution. Her class contains elements of her students talking about their individual family histories. Hall is encouraged by the young minds she has been able to influence during her three decades of teaching.

“I guided the students on this journey to read, enjoy, and hopefully examine their own history and be the best citizens possible along the way,” Hall said.

If you have a suggestion of someone who should be profiled, send their name and any available contact information to [email protected]