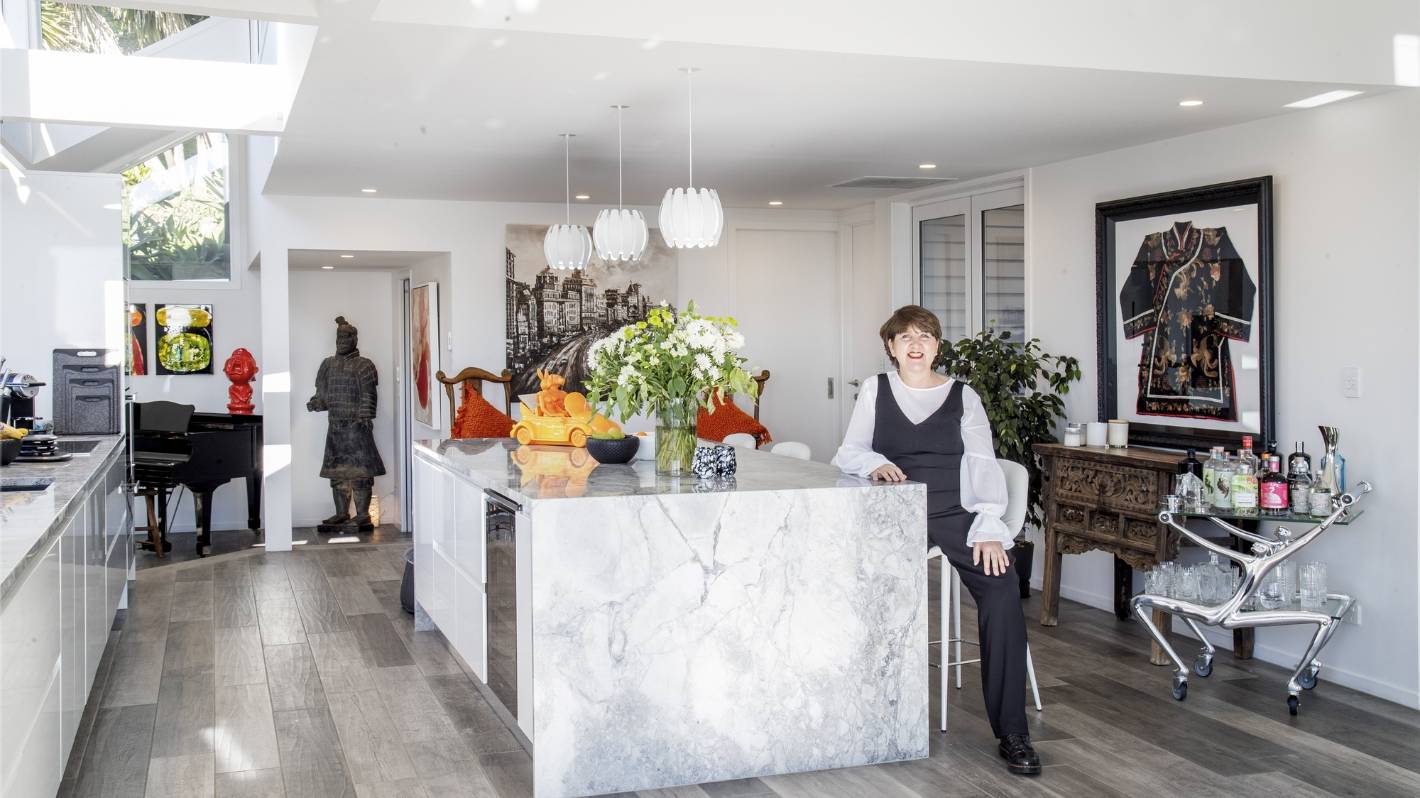 Cary Cochrane runs the Flagstaff Gallery in Auckland and hosts the Art in the Park event at Eden Park. The hand-sewn framed jacket on her wall is 200 years old and was given to her husband Doug when the couple lived in Shanghai.

Cary Cochrane is the owner of Flagstaff Galley in Auckland and co-founder of the inaugural Art in the Park event in Eden Park. She lives in Devonport with her husband Doug and two pugs, Bonnie and Scrappy. The couple have two adult children, Hattie (23) and Angus, 20.

Caries: Doug moved to New Zealand for his job in 2014, seven months before the kids and I arrived. So he bought this house before I even saw it.

It is the sixth country in which we live. Doug and I are both originally from London and his work at the Tesco supermarket has moved us to Hungary for four years, then Turkey for three years, Shanghai for a year, Beijing for 2.5 years, and Tokyo for a year. .

I was diagnosed with ovarian cancer in 2010 so we returned to London. But Angus was diagnosed with epilepsy a year later, so we moved to the Cotswolds for a less stressful lifestyle for him. We lived in a farm built in 1604 on 3ha which is completely different from this house.

READ MORE:
* Clocks, cars and art – a home made for souvenirs and collections
* At home with Madeleine Brighouse
* Everything is for art in this sparkling villa

When we flew to Auckland for our first visit, the relocator showed us different suburbs, but we fell in love with Devonport – it’s so close to the city but there is a very close-knit community feel.

The mover was horrified that we lived on the North Shore and that Doug had to drive every day to get to work near the airport. But he used to commute to London, so he didn’t mind.

This house was built in 1907 but was enlarged in the 80’s so it was tired and very 80’s. We didn’t expect to have to demolish 80 percent of it, but once we got started the builders found cracks and rot so we had to re-stack and start over.

We could have bought a house already finished, but this house has the most spectacular view in Rangitoto, which is what really sold us.

This house is also art. When we lived in Izmir, I opened Turkey’s first English language bookstore which also sold arts and crafts. This is where my interest in art started.

When we arrived in New Zealand I wanted to enter the art world, so when the Flagstaff Gallery went up for sale six years ago, I jumped on it. The gallery is 28 years old and I like being able to carry on the tradition of curating artists mainly based in New Zealand.

It was through a causal conversation with Nick Sautner, CEO of Eden Park, that Doug, my co-director Sofija Matich and I formed the first Art in the Park event in partnership with Eden Park. We will have 105 artists showcasing their work, including some amazing emerging artists.

Most of our art collection has traveled to several countries with us.

We visited the Terracotta Warriors several times when we lived in China, so we bought a clay replica from the same area as the Real Warriors. The hand-sewn framed 200-year-old jacket on the wall was given to Doug when we lived in Shanghai.

I spotted the red sculpture on the piano at an art fair in Beijing in 2007. There were eight of them in different colors. I bought the red because it represents China to me. A buyer from MoMA in New York bought the purple. Every object in our home, be it a piece of furniture, has a story and that’s what makes it so special.

Our son Angus is now in Wellington studying architecture and Hattie works in advertising in Auckland. She moved five months ago and some people might be wondering why two empty nests would need a five bedroom house, but we constantly have friends and family staying. When the borders were open, we had friends from all over the world who came to stay anywhere from a long weekend to five weeks. So we really need these extra rooms!

The American kitchen and the dining room are on the first level. We entertain a lot, so we wanted an open and convenient space where guests can congregate while we cook.

Probably the scariest part of our entire renovation was watching the Brazilian granite countertop being lowered into space by a crane. There was a long enough wait to get it, and I was terrified that they were going to drop it and I had to start all over.

Art in the Park takes place at Eden Park in Auckland from July 23 to 25. Visit www.artinthepark.co.nz.