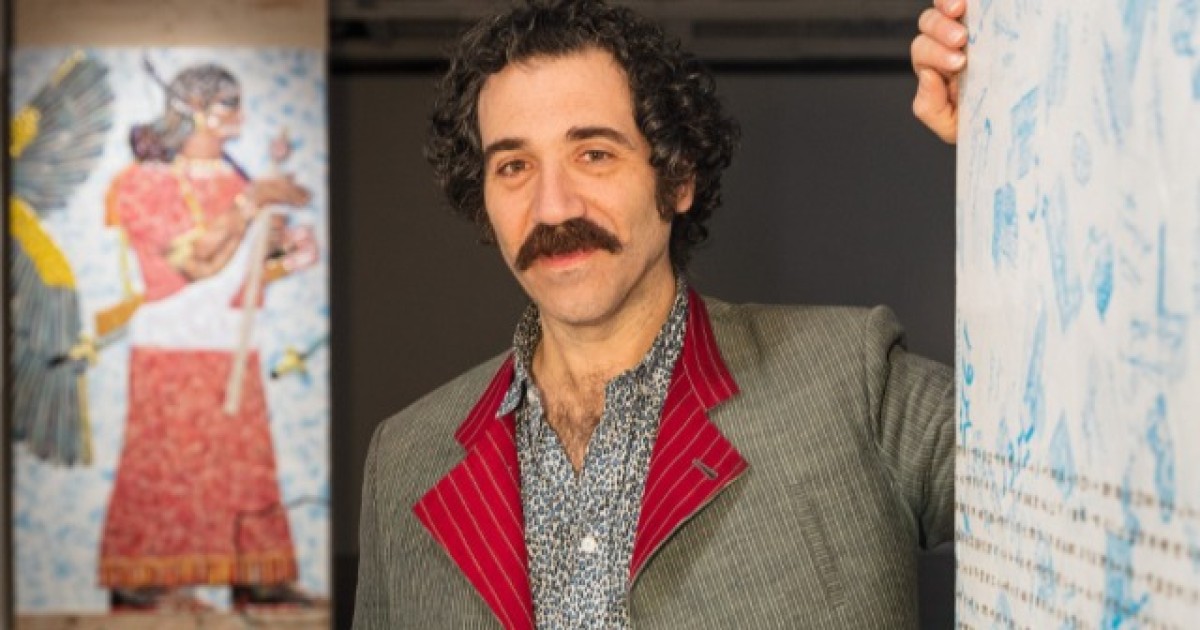 For Iraqi-American artist Michael Rakowitz, the recent American wake-up call with its problematic monuments was inevitable.

The Grant Park sculpture of Christopher Columbus, for example, became a contested site during civil unrest in Chicago after the police killing of George Floyd in Minneapolis, then was eliminated for his own protection. In Richmond, Virginia, in the former Confederate South, a triumphant monument to defeated secessionist Robert E. Lee took on new meaning when Black Lives Matter protesters covered it in graffiti, before his state eventually tore it down .

Even before that hot summer, Rakowitz found talking with his students at Northwestern University about the contradictions and challenges in our civic history was an inspiring research process. These conversations led him to “The Monument, the Monster and the Model”, his small but intense new exhibition which opens May 6 in Rhona Hoffman Gallery in West Town.

Known for making reconstructions of antiquities looted or destroyed in Iraq following its post-9/11 US occupation, the 48-year-old Edgewater resident has exhibited around the world and his art has attracted international collectors and accolades . He sees his new sculptures – the largest constructed from artifacts with direct ties to Lee’s memorials – as engaging in an acute dialogue with the monuments that have been removed and those that remain standing.

“What,” he wondered aloud in conversation this week at the gallery, “it means for people to have to navigate their lives around, you know, certain monuments that one might call racists, white supremacists, settlers? … If you’re a young Native growing up in Chicago, seeing Columbus on a pedestal doesn’t just communicate the celebration of traveling around the world. It is to celebrate the beginning of the genocide.

The centerpiece of the exhibition is a deliberately Baroque critique of monuments and their creators called American golem. The sculpture demonstrates direct links between two pairs of monuments that shared designers: a defeated Lee memorial in Charlottesville, Virginia, and the Ulysses S. Grant memorial in Washington, D.C., both designed by sculptor Henry Shrady ; and the Lincoln Memorial and a Confederate memorial in Wilmington, North Carolina, both designed by Henry Bacon. The North Carolina memorial fell in 2020 following Black Lives Matter protests.

To assemble the menacing, vaguely corporeal form, Rakowitz collected household objects from some of the same artists, foundries, and quarries responsible for the original monuments. The wooden form that serves as Golem the figure’s torso was once used to cast bells for Southern churches; the artist said he found it in a store offering it as “hipster decor”.

In his own handwriting, he tells the stories of the links between old and new, imprinted directly on the small sculptures, marble slabs and forms of bell making.

“The work I wanted to do for this exhibition really revolves around watching this quote from novelist Robert Musil – who said there’s nothing more invisible than a monument – suddenly become a contradiction of sorts”, said Rakowitz, a New York native. Yorker. After Floyd’s murder and the civil protests drawing attention to the racial injustice that followed, “people started to really pay attention to who was in front of them on those pedestals.”

His new works, he said, were “very influenced by what happened on the streets at that time and what is still happening today”.

WBEZ asked Rakowitz to explain the artistic process behind three works in the exhibit, which runs through June 18. Responses have been edited for clarity and conciseness.

On the sculpture “Behemoth”

For his work “Behemoth,” Rakowitz created a Robert E. Lee-inspired shape, then wrapped it in tarp. The sculpture folds and unfolds. Credit: Steve Johnson/WBEZ

Even our own mayor talks about taking that [Columbus monument] which had been wrapped and then removed and put back in place. So it’s like, you exhale, you inhale. These things that perpetually go up and down showed that these impulses are still very much alive. And that shows some of the cruelty of that indecision, you know, the inability to let go.

On his master figure “American Golem”

Racowitz: “When I started collecting all these works, all these things that existed on a domestic scale by the same artists, I started thinking about how they could all be put together, and how they’re all infused with some type of power. And to create this kind of American Golem, you know, starting to do its monster job.

And as I often do with my projects, the simple fact of being able to annotate them in writing becomes a form of drawing for me. But it also continues in some ways that legacy of how these monuments have been marked by people. They started to get shrouded in truth when people, you know, wrote messages on them, spray painted them.

And so this one really speaks to the fact that when you look at both sides of the horse, it tells a story about the Grant Memorial and then the Lee Memorial. But of course, Shrady’s story is not unique in this sense. You had a lot of these carvers doing things then that were for the North and the South. And so I think of it as this two-faced monster.

On a set of five drawings that show monuments throughout history that have found new life, including one in Grant Park

Rakowitz“It’s really about seeing what these monuments can be, that there’s actually the possibility of thinking about these things having a second life.

This one tells how, in 1897, a bronze statue of Christopher Columbus was removed from what is now Grant Park. Back then it was called Lake Park. In 1905 it was melted down and recast as President William McKinley – who enforced these anti-Native laws. But it was melted down because people thought it was so hideous.

I found it through one piece WBEZ about the city landmarks committee and thinking about, you know, how people see that as iconoclasm when in fact there’s actually precedent for melting down a statue – and a statue of Christopher Columbus – in Chicago.