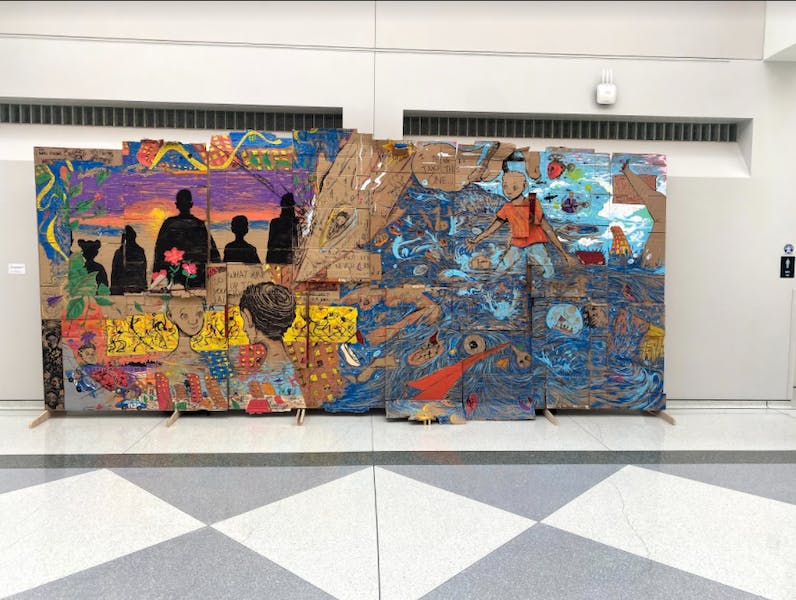 Never since the onset of COVID-19 has creativity echoed so loudly in the halls of the Center for the Arts at UB. On Thursday, the CFA opened its doors to four new exhibitions collectively called â€œFall into Artâ€.

Featuring two large murals and several smaller exhibits, the bleached white walls of the Atrium CFA are covered in an explosion of color for “The Town Speaks To Itself,” an exhibit honoring Buffalo’s rich history in the field. of murals, graffiti and other forms of street art and their relationship. to social justice.

Curated by Bronwyn Keenan, director of the Arts Collaboratory, life-size murals and several small exhibits take up much of the wall, telling tales of life on the streets of Buffalo.

â€œStreet art is the city talking to itself,â€ Keenan said. â€œIt has long been a voice for the voiceless who have used the city walls to seek justice. This is where communities pay homage to loved ones and celebrate heroes.

The left wall of the atrium houses â€œAn Attempt to Illustrate the Ineffable by Walking Towards 163rd Street East in the Bronx,â€ a cardboard mural by Tayron Lopez, the 2021-22 Artist in Residence at the Arts Collaboratory. The play portrays an array of sights seen and conversations overheard while crossing 163rd Street. The mural is filled with drawings of people, floods and flying heads side by side with much of the dialogue heard, containing phrases like â€œI think I’ll take this oneâ€¦â€ and â€œSo, what do you do later! “

Ma-Nya Champagne, a major junior in photography, felt the murals were very realistic and respectful representations of New York City.

â€œ’The City Talks to Itself’ is a big name for these global pieces because when I walk through the gallery I feel like I’m back in Brooklyn,â€ said Champagne.

In the lower gallery, attendees can explore the works of MFA 2023 candidates with the appropriate title â€œIncomingâ€.

This exhibition has been open since August 31, but a reception was organized during â€œFall Into Artâ€ for the candidates to officially introduce themselves.

Showcasing an exciting range of artistic styles from the next generation of artists at UB, Mark Snyder, head of artistic resources for the Department of the Arts, says the exhibition serves as an entry point for the incoming class to the world. broader art.

Taylor Robers, an MA candidate from Minnesota majoring in studio arts, drew “Summer Home,” an oil painting on linden of a blue bird’s nest depicting several connections to her life in the House.

The spectrum has covered the University of Buffalo since 1950, your donation today could help #SaveStudentNewsrooms. Please consider donating today.

â€œI did a bluebird survey in Minnesota as a volunteer and it was the only bluebird nest of the entire survey season,â€ Robers said. “So it was kind of a tribute to that and then to leave my nest at home and move to a whole new place.”

Another important piece in the exhibit was an archival pigment print titled “Nowhere Town,” by MFA contestant Alex Cassetti, which features a black and white photo of a barn.

â€œThey all have their own personal pieces, in a way, exhibiting their own artistic direction and their own style,â€ Snyder explained. “So this is a way of presenting our grad [students] to teachers who may not have gotten to know them yet because we are only at the second week of class.

Seth Woods, cellist and visiting professor at the UB Center for Diversity and Inclusion, says he’s a fan of the variety of mediums on display and felt it was a great opening event for the new class.

â€œIt’s really great to get a feel for what the MFA students have been up to. Downstairs, the exhibit is pretty exciting, â€said Woods. “A lot of risk taking with some of the little ones [and] larger scale works on mixed media, films and jewelry [mediums], so it’s a great variety. I can’t wait to see what they do [in the future]. “

Revealing a lesser-known piece of UB history, Liz Park, Curator of UB Art Galleries Exhibits, organized the historic â€œF: Reconstituting Tolstoy Collegeâ€ exhibit in the second floor gallery , which guides participants through the history of Tolstoy College, The Anarchist College of UB (one of six experimental colleges managed by UB), through exhibits of furniture and archival material from the existence of the school, from 1969 to 1985.

Representing nonconformity in its purest form, the furniture on display emphasizes anarchist ideals of getting by with what you have, such as a table with sawhorses for the legs or chairs without a seat associated with it. a makeshift table made of wooden planks.

“Anarchism was a way to explore how a group of people can work together, honestly [and] frankly, and determine their own educational path, â€Park said. “So this exhibit is an attempt to read a hard-to-grasp story.”

Scattered throughout the exhibit are a variety of materials detailing the college’s ideals, policies, and classroom programs. Two of the most interesting documents are a teacher’s policy on assigning a fixed number of A’s and Spectrum articles written by Charles Haney, member of Tolstoy’s college.

“For him [Haney] it was really important that his writings, his politics and his thoughts were shared with the students, â€Park said. “Charles Haney was someone who was instrumental in college.”

As viewers soak up the variety of CFA works, no exhibition stands out as much as the “Afrotecture (Re) Collection” by artist Heather Hart, wowing attendees with a recreation of the balcony of the Lorraine Motel in Memphis, TN, where Martin Luther King Jr. was assassinated in April 1968.

Recreating such a historic place is no easy task, however, Hart got used to creating this type of spacious facility, growing up with his father, a carpenter.
â€œShe experienced from an early age seeing how wood can demarcate space and how it becomes a container for social relationships,â€ Park said.

Participants take turns climbing the solid gray staircase of the interactive room where the sound of footsteps is lost in the whispers of amazed admirers, a breeze of loneliness creeping in as they reach the top, where the whispers are drowned out by the cold atmosphere of one of the darkest days of civil rights in the United States

Some visitors liked the original concept Hart used for the exhibit. Swedin Peart, a graduate in speech and hearing sciences, appreciated the strangeness of the â€œglassy floorâ€.

â€œI thought it was very different. It wasn’t theâ€¦ ordinary gallery that you walked into and saw ordinary paintings or artwork, â€Peart said. “There was more of a story, it was cool.”