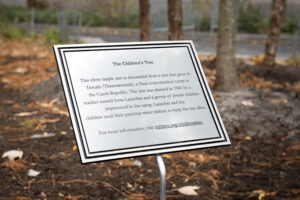 On Thursday, December 2, 2021, the Museum of Jewish Heritage – A Living Memorial to the Holocaust and Battery Park City Authority held a special ceremony to dedicate “The Children’s Tree,” the descendant of one planted by Jewish children to inside the Theresienstadt (Terezín) concentration camp.

The remarkable story of the tree is a moving tribute to resilience and hope. The Nazis allowed the children of Theresienstadt (in what was then known as Czechoslovakia) to be educated as part of a promotional ploy to hide the camp’s genocidal purpose. In January 1943, a teacher named Irma Lauscher bribed a Czech camp warden to smuggle a sapling into the camp. She wanted to plant the sapling in a secret ceremony to celebrate Tu B’Shevat. Along with a group of Jewish children imprisoned in the camp, Lauscher planted the sapling. The group used their water rations to feed him.

“The children of Theresienstadt took care of the tree every day, knowing that it would last and live a life they wouldn’t have,” said Michael Berenbaum, world-renowned historian and director of the Sigi Ziering Institute from the American Jewish University.

Most of the children who planted the tree were deported to Auschwitz, Poland’s largest extermination camp, and died there. Of the more than 15,000 Jewish children imprisoned at Theresienstadt during the Holocaust, less than 200 survived.

After the liberation, the survivors placed a sign at the base of the tree proclaiming: “As the branches of this tree, so the branches of our people!” Although the tree was later destroyed in a flood, saplings had been cut and planted in Yerushalayim, San Francisco, Chicago, Philadelphia, but not in New York City, home to the largest community of survivors. of the Holocaust and their descendants from any city outside. Israel.

A Jewish philanthropist recently bought a historic farm in Pennsylvania where seven trees grow from cuttings from the original tree, and agreed to donate one to the museum. This 15 foot tree was recently transported to Battery Park and replanted – seventy-eight years later – and will be cared for by PS / IS 276 students for generations to come.

The tree bears the name “The Children’s Tree” in memory of the Jewish children of Theresienstadt who planted the tree for the first time, and in honor of the students of the PS / IS 276, located in front of the museum, who will become the guardians of the tree. for generations to come.

The dedication ceremony included remarks by Linda Thomas-Greenfield, US Ambassador to the United Nations; the Czech Consul General Arnošt Kareš; Museum President and CEO Jack Kliger and Paul Radensky, Senior Director of Education at the Jewish Heritage Museum; Dr. Michael Berenbaum, and music from the Advanced Student Chorus at PS / IS 276: The Battery Park City School.

“With roots born from the Holocaust, the tree, now firmly planted in the ground outside our museum, has branches that point us to a better future,” said Jack Kliger, president and chief of the direction of the museum. “We call this silver maple ‘The Children’s Tree’ because of you, the children of today and tomorrow. As you learn about the children who planted and nurtured the original Tree of Life 80 years ago, you become witnesses to Holocaust history and keepers of a piece of history in your own backyard.

“We are all moved by different exhibits, different ways of telling the stories of the Holocaust. For me, personally, the story of this tree is one of the most powerful I have ever encountered, ”said Ambassador Linda Thomas-Greenfield.

Several Holocaust survivors, including Theresienstadt survivor Fred Terna and Mara Sonnenschein, a great-granddaughter of Dorette Roos, who died in Theresienstadt, were also present.

After an indoor program, participants moved outside, and Mr. Terna and Ms. Sonnenschein were among those who watered the tree, joined by a number of current and future New York City Council members. York.

“My feeling for the tree can be summed up in one word: memory. It is the occasion to remember. This plantation is a form of remembrance and that is what this tree is: continuity, ”Terna said in his remarks.