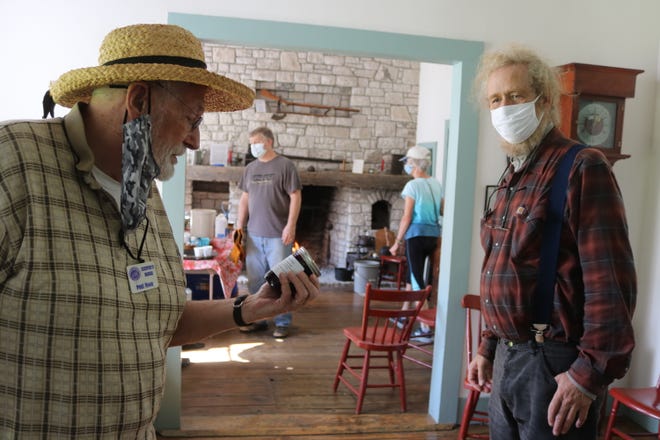 TOWNSHIP OF DANBURY – Lakeside Chautauqua and the Marblehead Peninsula Chamber of Commerce on Saturday hosted the 25th Annual Lakeside-Marblehead Lighthouse Festival, which opened Wolcott’s ‘Keeper’s House’ to the public and showcased a living encampment of civil war.

Among the festival workers was Paul Moon, who served as a judge in the Ottawa County Court of Common Pleas for 18 years.

Although he has long known his family had strong ties to the area, it took decades for Moon to discover just how important those ties were to Ottawa County’s rich nautical history.

Discovery of an ancestral link with Benajah Wolcott

Moon is the third great-grandson of William Kelly, the man who built the iconic Marblehead Lighthouse in 1821.

But a few years before taking the bench in 1991, Moon learned of another family connection – he’s also the fourth great-grandson of former lighthouse keeper Benajah Wolcott.

“My dad used to tell us stories about his relationship with Kelly, but he never said anything about it,” Moon said on Saturday as he stepped into the house where Wolcott resided two centuries ago.

It was in the mid-1980s that Moon said that another member of the local Kiwanis club who worked in real estate approached him about a house that was for sale at the time and that he believed to be related to Moon’s family.

Following:Big dreams for the future of ‘The Art Garage’ in Port Clinton

Moon and others rushed to save a historic home

Moon contacted other family members and learned of the close relationship with Wolcott. With the house, which then had additional historical value, being for sale at the time, he and other members of the Ottawa County Historical Society set out to save it.

“We just looked at each other and thought, ‘We have to do something,'” he said.

The Ottawa County Historical Society then bought the house, but got another big surprise when it finally got the keys and was able to check out the structure.

Moon described the condition it was in at the time as “terrible” and they realized it would be a major undertaking to restore it completely. But they got involved in the project.

“The historical society entered the breach and has been very successful ever since,” he said. “The restoration went better than expected. We are really happy with the results.

“We have become so dependent on household appliances,” she said. “But it’s really starting from scratch. It’s a much slower, more natural way of cooking. It’s understanding what they had to do to survive.

Shemensky’s nephew, Lee Fritz, was tasked with keeping the coals at the right temperature.

“Taking care of the fire is an art in itself,” she said.

It also gave 7-year-old David Bickley the chance to do one of his favorite aspects of living history reenactments – performing exercises with the 14th Ohio Volunteer Infantry.

Although young, Bickley is somewhat of a veteran reenactor, having been involved in the hobby since he was around 2 years old.