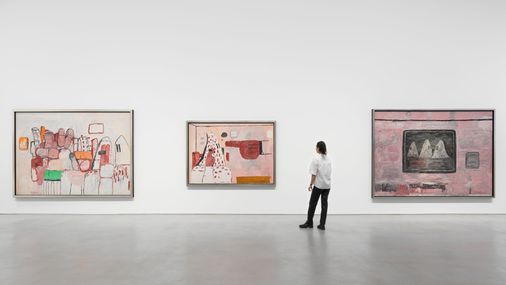 “Philip Guston Now” is less delayed than it was: the delay has been reduced to two years, and the show will open in Boston on May 1, at the Museum of Fine Arts. But the glove fell. “Philip Guston 1969-1979” is less a preview than an intervention: the exhibition is a joint work between the gallery, which represents the artist’s estate, and the Guston Foundation, directed by Musa Mayer, the daughter by Guston. Last year, Mayer quickly denounced the postponement of museums; hundreds of artists, curators and critics have supported her in an open letter in the Brooklyn Rail, which now has 2,600 signatories.

The show gets straight to the point. In the first of its two large rooms, stupid and inept Klan men, hideous avatars of enduring American racism, are all around a group of paintings made in 1969: huddled tightly in a convertible in “Riding Around”, smoking cigars and splashed with blood; office chatting in “Open Window II”; and, in one of Guston’s most revealing images, “The Studio,” in which a Klansman, crouching like a fire hydrant with a smoking cigarette sticking out of a slit in his hood, uses a huge red hand to paint a self-portrait. It is a high voltage charge of self-involvement, Guston acknowledging his own white privilege decades before the expression became mainstream; it gives form to a passive complicity, the artist himself caught in the act depicting the rottenness of the heart of American life – because he could.

It’s shocking, that’s for sure. But it is also a basic material in Guston’s work. A founding member of the Abstract Expressionists – Guston and Jackson Pollock were high school classmates in Los Angeles – he very publicly defected from the movement in the late 1960s, unable to look away from a country caught in violent climaxes of social upheaval and racial conflict reaching overexcitement.

Hate was something Guston knew well: his parents escaped the rise of anti-Semitic violence in Ukraine to end up in Montreal, where he was born in 1913. As a child, his family moved to Los Angeles, where the Klan was an active presence inflicting violence. on Jews as well as on black Americans. It left a mark. Some of Guston’s early works, crisp and menacing, were by the Klan; on the other side of abstraction, reducing them to immobile imbeciles was, in a way, his revenge.

Guston made a choice: to risk his comfortable career to live in the real world, rather than living in an abstract hell of vague emotions. His paintings from this time combine it more with the radical aesthetic of the ’60s counterculture – grossly visceral, raw. and sweetly morbid, they always remind me of Robert Crumb’s underground comics – that all art movement cloistered safely inside white walls.

Guston’s coming out took place in 1970 at the Marlborough Gallery in New York, where his Klan paintings would make their public debut, completely destabilizing a smug and self-satisfied art world that had isolated itself from American reality. more and more tense. (Predictably, the critics hated them.)

Remarkably, the Hauser & Wirth exhibition brings together six of these paintings, including the haunting oblique “Blackboard”, 1969, rarely seen in public since, in which three Klan men are crammed into a dark panel surrounded by fleshy dabs of gray paint. and pink. It looks like an exorcism – Guston ridding his body of gestural abstraction, paint profusely applied in rough lines.

“Blackboard” is one of a handful of paintings from this sequel to finally resurface. Several of them are part of major museum collections in the United States and abroad and are frequently on display. In 2011, the Museum of Modern Art “Abstract expressionist New York” – the definitive exhibition of the movement, of the institution that defined it – gave Guston the last word, his last gallery dominated by “Edge of Town”, 1969, with his strolling cigar-smoking Klansmen signaling the point of departure of the voluntary naivety of AbEx in the very house he built.

The point is, this work is far from underground – it is Guston’s hallmark, the work that defines him as an artist who took sides in a turbulent time when the sanctioned art world stood. upright. It is enduringly relevant in part because, in American culture, what is more enduring than racism? And when, again, could this be more relevant than now?

This is where the sensitivities are. The museums – which, along with the MFA, include the National Gallery of American Art in Washington, DC, the Museum of Fine Arts in Houston, and the Tate Modern in London – have mutually agreed, in a joint statement, to the postponement in order to take the time to ensure that Guston’s “powerful message of social and racial justice” can be “more clearly interpreted”.

I don’t know what that means, but I do know this: in an age when museums are evolving as fast as possible to become the equitable and inclusive institutions that they need to be, their progress will always, inevitably, be far too slow to be. mostly. The police murder of George Floyd tore apart a decades-old wound that escalated far more than it healed.

In an accelerated time with unwavering patience, to be slow and careful can seem like a transgression. We can congratulate the institutions for wanting to do things right. But in a moment that requires courage, the postponement always gives the impression of hiding. I can understand the outrage.

What worries me, as far as Guston is concerned, is that this work – which museums have inadvertently stoked into a long-lasting flashpoint, with more than seven months still to go – will be all we need. will be able to see when “Philip Guston Now” finally arrives. I rounded the last corner of this room, and barely mentioned the dozen paintings in the second room – Guston’s grand and gruesome last act, a legacy of pictorial magnificence tied to downright absurd horror.

The show compensates here for its heavy loads with real discoveries and wonders. There are no hoods in this much larger space, although their “generalized inhumanity” an earlier piece will surely prompt some readings: “On Edge”, 1978, dark and obscure, with thick paint reminiscent of the diversion. Guston’s of abstraction long ago (although the pale pink dish and the horizon line actually dock it); “Ancient Wall”, 1976, a tangle of slender, raw legs folded into a mound of shoes that darkly echo the Holocaust.

There are works here that I, a verifiable sidekick of Guston, have never seen: “Back View II,” 1978, a cube of fleshy armor adrift against a background of hospital churning blue; ‘Hand of the Painter’, 1975, a rheumatic, stocky, dull crimson claw hanging from a block of what, exactly, I’m not sure.

The dominant sense was that of mastery: viscerally resolved forms and figures, painting intuitively applied to be materially present and illusorously invisible at the same time – a complete immersion in the artist’s alluring and horrifying vision. Will “Philip Guston Now” allow us to see this vision, shrouded as it is in long-standing controversy? I hope.