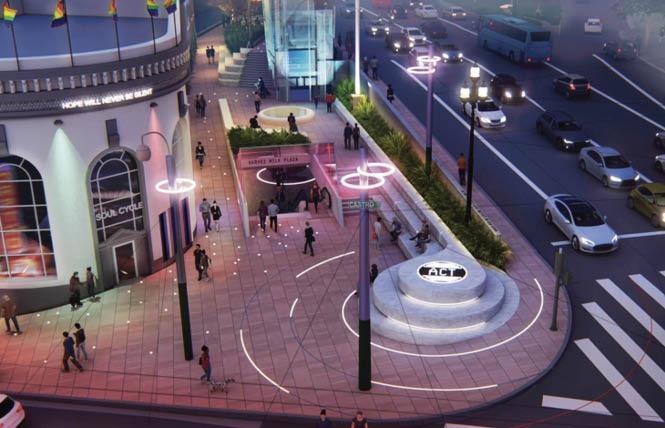 Almost three years after weighing in on the proposal to revamp Harvey Milk Plaza for the first time, a panel of local art experts have come to their support for the latest design for the city’s LGBTQ Castro neighborhood public park.

At its September 20 meeting, the Civic Design Review Committee of the San Francisco Arts Commission voted unanimously 5-0 to support the current changes to the project. Committee members hailed the new design as a “breath of fresh air” and an “amazing” change from what they had voted on before.

“You have decided to use the space much more actively than passively. I applaud all the effort,” Gay Arts Commissioner Paul Woolford said. “I think this is remarkable and a place people will come to visit to have the opportunity to experience the Harvey Milk phenomenon.”

Commissioner Abby Sadin Schnair added that the revisions are “such a turnaround. I’m blown away. Whoa!”

The Friends of Harvey Milk Plaza unveiled their new proposal for the Castro Muni station entrance area in June following another round of community meetings to get feedback on its plans. As the Bay Area Reporter noted at the time, the site would be reconfigured to make it more accessible to people with reduced mobility. A new spiral podium would be built at the entrance to the square at the intersection of Castro and Market streets.

A smaller staircase leading to the underground metro station would be built. A pink and transparent overhang above the escalator that goes to the MUNI station would be used to protect it from rainwater.

The color scheme is derived from that of the red-and-white megaphone, the namesake of the square, famous for rallying neighborhood residents and the city’s largest LGBTQ community during events held at the site and during the marches around it. have arisen. The late Supervisor Harvey Milk was the first gay man elected to public office in San Francisco and California.

He was shot 11 months into his first term at City Hall on the morning of November 27, 1978 with then-mayor George Moscone by disgruntled former supervisor Dan White. City officials named the square in honor of Milk, a strong advocate of public transport during his lifetime, in 1985.

Quotes from Milk would be embedded all over the place. A memorial grove with 11 trees, of different kinds, symbolizing Milk’s 11 months in office would stand at the entrance to the square from Collingwood Street. In the same area, there is said to be a “Grove of Hope,” symbolizing the candlelight vigil that took Castro’s mourners to City Hall after Milk and Moscone were killed.

Crispin Hollings, a gay man who lives near the plaza, admitted in an email to the arts committee that he was initially concerned about the proposed renovation. But the latest design, he said, addresses those concerns and is “visibly pleasing” and will be a “functional” asset to the neighborhood. “

Muni Square and Station had opened on June 11, 1980. Howard Grant, who at the time was married to the mother of his children but later became gay, designed it with his curved brick staircase and its gardens below. Grant and others vehemently opposed any major reconstruction of the square, arguing instead that more minor cosmetic changes can be made to provide a better user experience and improved memorial to Milk.

Grant submitted a three-minute video for Monday’s meeting outlining their concerns. He noted that the square has historical significance worth preserving, with some in the community calling for it to be a city landmark.

Art historian Paul V. Turner, a former Stanford professor who was friends with Milk and her lover Scott Smith, called the place Castro’s historical item that should be preserved in an email to the committee of arts. A resident of the neighborhood since 1973 and a frequent user of the transit station, Turner argued that none of the redevelopment proposals “justify the destruction of the existing plaza.”

He added that “every time I go up and down the steps, I appreciate the innovative design,” especially its “graceful curves” and warm brick material.

Alan Martinez, a gay man who served on the city’s historic preservation commission, opposed the redesign of the square. He warned that much of the glass in the design was susceptible to damage and wondered how repairs would be paid for when they were.

“Unless the project comes with a huge endowment to fix it every year, it will be sad,” he said. “It’s gonna be a mess.”

But there have long been complaints that the square is difficult for people with limited mobility to navigate and that the windswept area is a less than desirable location for the public. Over the past decades, neighborhood leaders have attempted to curb its use by homeless people and drug addicts.

Leaders of the Friends of the Plaza group insisted that the city approve the renovation project. Its cost remains unknown although previous iterations have been estimated at at least $ 10 million.

Gay state senator Scott Wiener (D-San Francisco) has secured $ 2.5 million in public funding since 2019 for the project. He urged the arts committee to approve the design changes.

Neighborhood groups also sent letters supporting the latest design, including the Castro / Eureka Valley Neighborhood Association, the Castro Merchants Association, and the Castro LGBTQ Cultural District Advisory Council. Cleve Jones, a longtime resident of Castro, a gay rights activist who was friends with Milk, also praised the group of plaza friends for listening to the concerns people like him have voiced about the plans previous ones.

“I love it,” Jones said of the latest design, saying it is “really beautiful” and fixes the current stairs to the station, which he called “a death trap”.

The Friends of the Plaza Group engaged the SWA Group, an international landscape, architecture, planning and urban design company, to work on the revised site plans. His inspiration for the design comes from the concept that without action there is no hope, explained Daniel Cunningham, a gay man who is a landscape architect with the SWA Group.

“The community is looking for a memorial that represents Harvey as well as the movement he was a part of that continues today,” said Cunningham, the project manager for the redesign of the plaza. “It’s more narrative in telling the story of Harvey Milk.”

It has yet to get approval from the full arts commission once the final design is complete, and several other city agencies and regional transit oversight bodies will need to weigh in on it. No funding has yet been obtained to cover the cost of redeveloping the square.

As part of the San Francisco Municipal Transportation Agency’s Castro accessibility project, a new four-stop elevator will be built in part of the garden below the plaza, closed to the entrance to Muni Station. The SFMTA’s website for the project says construction is slated to begin this fall for the $ 14.5 million project, with completion slated for 2024.

The new plaza design requires an oculus centered on a plaza in front of the elevator entrance that brings sunlight into the underground lobby level of the transit station. This is reminiscent of Milk operating a camera store in the Castro from which he campaigned for a public office.

“Now that the elevator project is underway, it’s a time to honor Harvey Milk and do what’s right for Harvey,” Springfield said.

To learn more about the proposed redesign of Milk Plaza, click here.