When I returned to Emory this fall, I was greeted by a whole new campus. The updated Michael C. Carlos Museum was no exception. Clearly, Carlos has taken the time and space to reflect on past issues, pursue post-pandemic opportunities, and engage with the student body in innovative ways. The museum has persisted in offering visitors a thoughtful, respectful and diverse dialogue between the art of the past and the present. They now equally engage with modernity and history in some of the most transformative ways I have witnessed to date, including the new exhibition “Each / Other”, the revamped gallery of Asian art and the addition of the “Confronting Slavery in the Classical World” labels.

New “Each otherThe exhibition at the Carlos was a prime example of the museum’s transformation, as it actively celebrates the works of contemporary Native American artists who are often under-represented, prompting criticism and revision of museum representation. This exhibit was installed around the same time as the many other changes to the Carlos, leaving all museum staff busy and bustling.

One of these efforts includes a big visual change in the museum: the overhaul from the Asian Gallery. After four months of renovation, the Asian Gallery now has a space more conducive to both movement and presentation of the museum’s diverse Asian collection. The gallery space has been opened up by replacing a wall that previously blocked one side of the gallery with newer, less bulky exhibition plinths. These changes establish a better flow as visitors enter and move around the space, allowing viewers to examine the exhibits both up close and from afar.

In the redesigned Asian gallery, the focus on more realistic and immersive exhibits for traditional religious objects also provided a more complete and precise museum experience. For example, the “Four-Faced Shiva Linga” is now displayed in a circle, as it was intended to be seen. Each face is connected to one of the four cardinal directions, instead of being placed against a wall or a corner of the gallery. Likewise, an alcove was created at the entrance to the gallery, containing a sculpture of the Hindu deity Ganesha, whose image is usually found at the entrances to temples and shrines. The symbolism and intentionality of these great works of art are unmistakable, especially when properly displayed in this new space.

A truly iconic detail of the Asian Gallery redesign is the inclusion of archival drawers in the wall, which visitors can open to reveal fantastic Indian works that are usually not on display. These drawers make the collection of Asian paintings much more accessible to visitors, especially children who can easily open and look inside these drawers. This display is also much less stressful on preservatives, as they are coated with UV-plex and better protected from light damage. Although this is only a small corner of the museum, these simple changes transform the experience and engagement with works of art in a much larger way.

This authentic and immersive experience continues in the Greek and Roman galleries, with additional nuances in the form of additional labels here as well. This new labeling of the Greek and Roman galleries involves the addition of new QR code labels alongside the original labels for 8 works of art in the collection. This new digital exhibition entitled “Confronting Slavery in the Classical World” was published jointly with the Emory symposium “In the wake of Slavery and Dispossession: Emory, Racism and the Journey Towards Restorative Justice”, and was performed by students taking HIST 241, “Facing the Slave in Classical Antiquity and the modern museum “. The purpose of these new labels is to raise awareness of the history of slavery in the ancient Mediterranean, a practice so widespread that nearly one in four people inhabiting classical Athens has been enslaved. 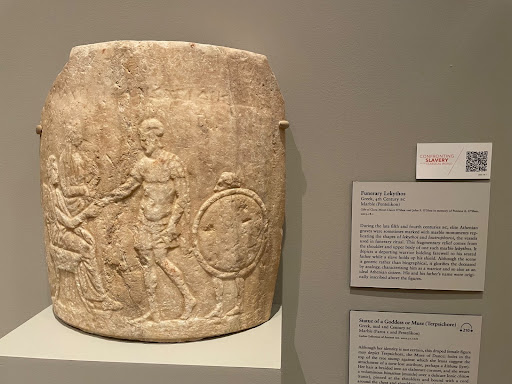 The exhibition “Confronting Slavery in the Classical World” resulted in the addition of the aforementioned QR codes, leading the viewer to information about the contributions of the enslaved person or the formerly enslaved freedmen to these culturally important works of art. This examination of brutal slavery in the classical Western world reveals a poignant connection to American slavery, with classical Greek and Roman ideas having served as the basis for the “ideal” of democracy, justice and art. Americans. By revealing these accounts, we see how this classic ideology for government and art, both in ancient Mediterranean and in modern America, was constructed through slave labor.

Many of the works included in this digital exhibit feature visual representations of both a enslaved person and an elite citizen, the former being so often overlooked that their inclusion in these classic works of art was commonplace to viewers. originals. Slaves were seen as objects that simply staged works of elite triumphant citizens. Today, instead of shying away from these images, visitors are encouraged to look at the major role that slaves played in society, both in the important work they did in their lifetimes and in their visual role. and symbolic in the context of these works. While these eight new labels may seem small compared to Carlos’ vast collection of classical Greek and Roman artwork, they signify a larger step in uncovering often relegated narratives that museums must heed. “Confronting Slavery in the Classical World”, alongside the new “Each / Other” exhibition and the new Asian gallery, serves to refocus important narratives. Although they are quite diverse in their history and meaning, they are united in their advancement of the museum.

Thinking of the current “Everyone / Other” exhibition at Carlos, I remember that “art” and “inclusion” are words that call for action and that require people’s work to really activate them. In this sense, I see the Carlos Museum transforming into an institution focused on action; the space has recently been activated by the energy of spectators, innovative students and passionate and engaged faculty. Although change is a slow process, we can see these actions bearing fruit in the exhibition and discussion of art at Carlos.