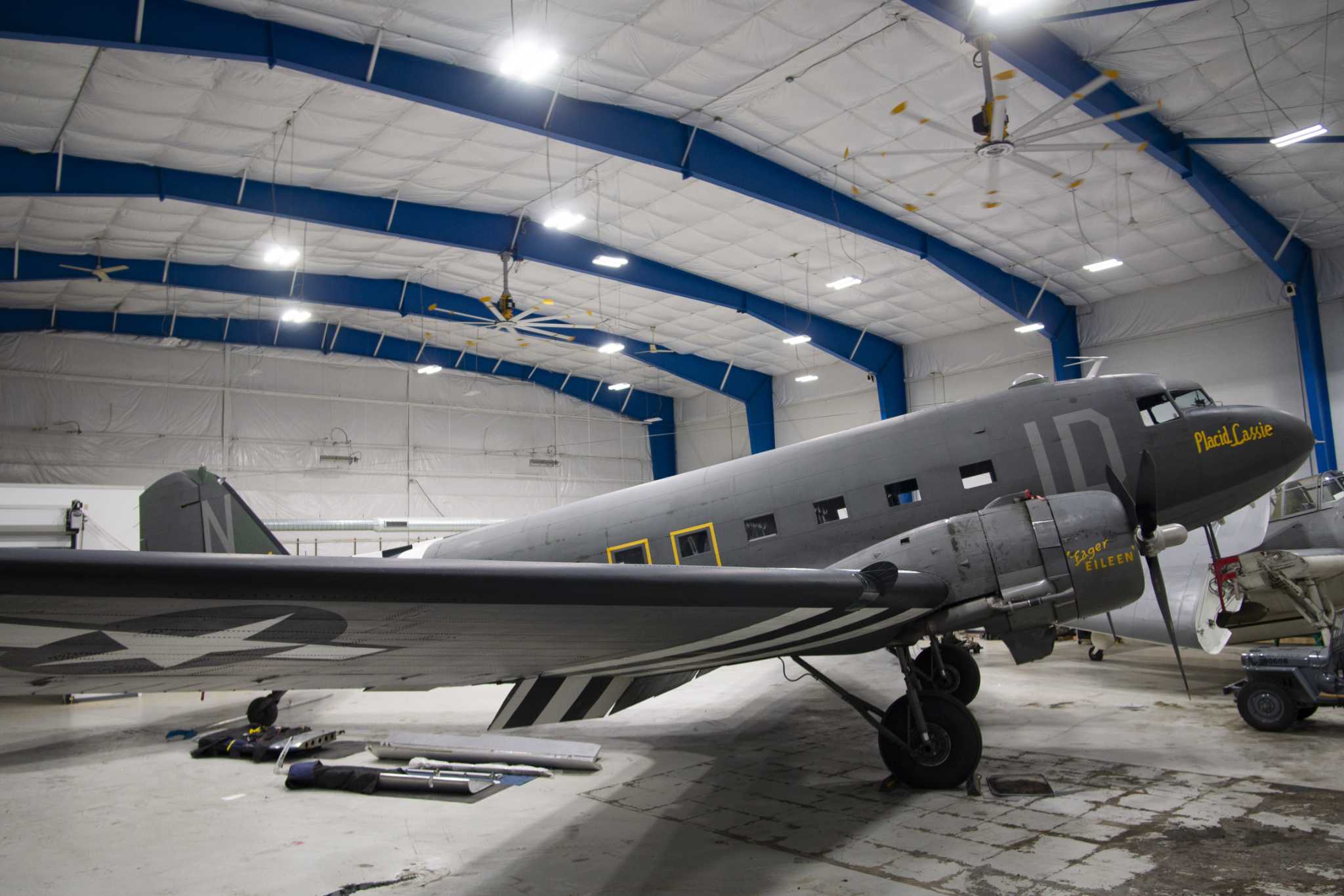 COLONY – The plane’s engines were hovering at just 100 feet. Its crackling propellers roared, filling the air with an unmistakable smell – burnt rubber, oil and dust.

It was living history, an old warbird shedding her soot in preparation for takeoff this afternoon and a circumnavigation of the globe she would undertake later this summer.

And yes, the plane is a “she,” named Placid Lassie with wings nicknamed “Eager Eileen” and “Idling ADA” for their distinct personalities.

The Placid Lassie is part of David Prescott’s plan to design an interactive museum for the public through his foundation, The Prescott Foundation at The Hangar at 743, on Albany Shaker Road.

The former Navy engineer turned vintage aircraft collector has secured several World War II artifacts for his Warbird Factory which he is restoring to become fully functional and more accessible to others in the future.

“There are a lot of other people who collect historical artifacts or WWII aircraft and they hide them all, they keep them all to themselves and it’s their own little toy chest,” he said. he declares.

“I want to show people, I want them to see what was there and where things came from,” he added.

And he hears that the museum stands out. He imagines it will be a place where touching the artifacts is encouraged and, for a fee, visitors can take a ride on one of the planes. Prescott’s team is also building a cockpit with better warbird displays for kids to play.

For $100, guests can take a short ride with looping party rides in a T-6 Texan Trainer.

Prescott wants others to experience the unique smell of rubber and oil that has been burning for decades.

“That smell, that hearing…you will remember it forever,” he said. “If someone like me doesn’t, he’s gone forever and history is gone forever.”

Although the foundation has the makings of a museum in place, it still has some way to go.

As it seeks to amass additional artifacts, the foundation is partnering with Hudson Valley Community College to form a fabrication and design workshop that will attract talent to rebuild aircraft, such as the B-25 “Old Glory” warbird currently under development.

The plane, which flew combat missions in Italy during World War II, needs serious and tender care after crashing in 2020. Prescott said his crew had to drill out every rivet, the pins holding the metal together, straighten the structure and put new metal skins on it before it gets airborne again.

It’s a multi-million dollar project that could be completed in three years if the foundation can hire more people to help with the repairs. Yet other restoration projects are also on the horizon.

Jonathan Ashdown, dean of the STEM school at Hudson Valley Community College, said the college’s senior students maintain and build the planes that keep them aloft. The college does not charge for the work, but the students put the experience at the service of their flagship projects.

Prescott may be years away from having a full-fledged museum, but the foundation already receives visitors from time to time and sets the stage for what is to come.

“It’s all the time and the work,” Prescott said.